I wrote previously about ‘angels in an earthly body’. While I suspect he won’t agree with this statement Ron Llewellyn was my angel when he parachuted straight into my life in 1989 rescuing me from the pain I felt at the recent loss of two of my closest friends. Grief constantly slithered through my body drawing me into a mental retreat.

“I want to do a world first, Ruth. Parachute at night from a hot air balloon. Would you do it with me? I want to jump from your dolphin balloon”. His request helped me to find my adventurous inner pulse again.

In 1981 Ron had established The Australian Air-Sports Centre at Tyagarah Airfield just north of Bryon Bay. An ex-Army officer with ten years service, Ron had been the leader of the Army Parachute Display Team, “The Red Berets”, also a member of “The Green Machine”. With his impressive skills he joined the U.S. Army’s prestigious “Green Berets” and spent time with the Canadian Army parachute team. During a training stint with the British “Paras”, he jumped from 25,000 feet at night, but from a plane and carrying 45 kg of equipment. He landed in a Druid burial mound.

Planning for the exercise began. With my balloon aloft for around two hours in the night sky every possible direction of drift to avoid being trapped by mountains or forced to ditch into the ocean had to be calculated. And it had to be a daylight balloon landing.

The time from official notification of the attempt to the actual jump was 3-1/2 months.

I launched my balloon, VH-JLX, on board my son Grant Wilson, Shawn Mackinga, with myself at the controls. Ron in his red and white jumpsuit with a light on the front of his helmet and his wrist altimeter illuminated by a fluro stick stood in one corner.

The balloon basket carried a navigational red light hung 5 metres below the basket, first aid kit, VHF and UHF radios and instruments lighted by a torch and lifted off at 0339 hrs. Ron jumped at 0344 hrs with my eyes following the diminishing speck of light from his helmet, my heartbeat increasing with each minute. He landed 3 minutes later.

I flew on tracking towards the coast with a keen eye on the horizon waiting for that first glimpse of morning light which sends silvery streaks into the sky. I finally landed at 0505 hrs. Flight time was 86 minutes.

“It was as black as the inside of a horse when I jumped” were his first words to me at the landing.

The records show that the first parachute jump from a hot air balloon at night was made on 20 December 1989 at Bex Hill, west of Byron Bay. And this angel now lives in South America. Our friendship has survived time and distance. 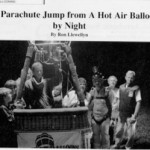 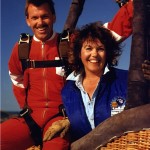 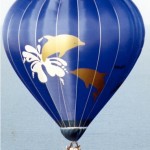