Adopted at the age of 3, a beauty queen at 17, Ruth moved to live in the United States of America, then spent four years in Japan with her next move to New Zealand in 1975 where she unexpectedly came face to face with her destiny – hot air ballooning.

Ruth Wilson is a mother of two sons who has embraced her passion to be one of the early pioneers of hot air and gas ballooning in Australia. Ruth has accumulated numerous ‘firsts’ – first commercial female balloon pilot in Australia setting up her own company in 1976, first national ballooning champion in 1979. A trip to Switzerland in 1985 brought gas ballooning into her life, a rare experience as no gas ballooning happens in Australia. In 1999 Ruth represented her country as pilot competing in the prestigious Gordon Bennett Gas Balloon Race launching from Albuquerque, USA.

Her love of extreme ballooning drew her back to pilot ‘Bernadette’ in the same gas balloon race from Bern, Switzerland in 2018. After 33 hours without sleep, little food and water Ruth and her co-pilot Tanys McCarron, landed their gas balloon in an Italian vineyard.

Her corporate work included six years as Chief Operations Officer with the ARC Centre of Excellence for Quantum Atom Optics at The Australian National University in Canberra, also Executive Director for five years for ACRN. For eighteen years Ruth managed her own PR/Media company in Sydney.

In November 2018 her first book (non-fiction) was published.

She has survived being stabbed near her heart, her childhood home being bombed, a pool drowning, potential power-line contact, near-death marlin fishing accident as well as a night World Ballooning Record attempt that collided with unscheduled storms.

In 1989 she was badly injured when a marlin fishing boat she was on was smashed by a seven-metre wave, upending the luxury boat, splitting it in two. She survived drowning initially to be dragged by a rip further kilometres out to sea. Dripping blood into the ocean from head injuries, wearing no life jacket, she was protected by a pod of dolphins until she was rescued from her harrowing experience.

This lady of the air who dances on clouds drew upon strong mental disciplines to survive her near death experiences in the ocean and in the air. 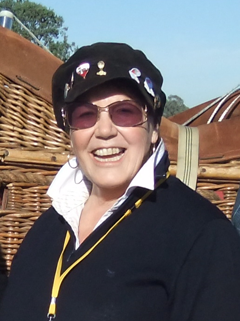