For all enquiries, please contact Ruth via email ruthewil@bigpond.com 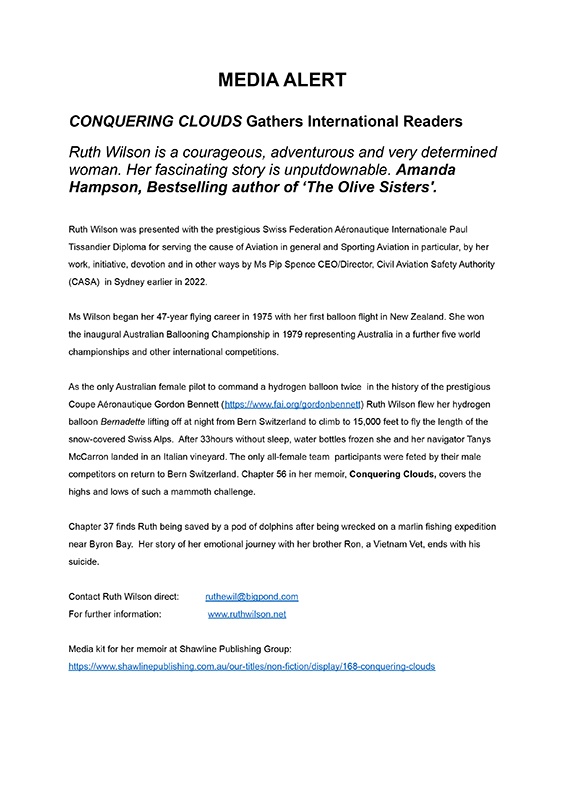 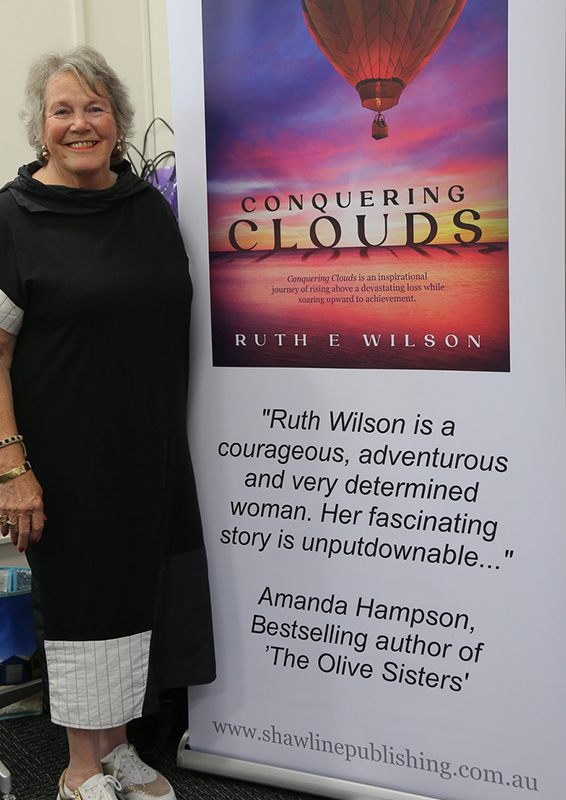 IT WAS AMAZING
"I know from personal experience that a lone balloonist stands out as unusual in a crowd with stories of their exploits. However, it takes a Ruth E. Wilson to stand out among balloonists. The Australian’s sparkling eyes and broad smile welcome strangers as much as her fascinating career. Her story in her memoir Conquering Clouds I (Shawline Publishing Group) will captivate you from beginning to end. From a poor Australian family that struggled for years to a world-renowned hot air and gas balloonist, Ruth’s is a story of adventure and perseverance.

Born to a single woman toward the end of World War II who bore a son a year later and who struggled to provide for her children, Ruth lived with her grandparents for a while and her brother was sent to a foster home. “The terminology ‘love child’ was nowhere to be heard of. ‘Bastard’ was more prevalent,” she writes. When she was three, her mother married, and her husband adopted the children. Ruth would be well into adulthood before she learned that the man she knew as Dad was not her biological father. “I had my birth father’s name…I had to find him.” The search lasted the rest of her life.

Like so many women of the era, Ruth married and had two children. “I had left the poverty and unhappiness of my childhood behind for a better life, one with a bright home, two beautiful children and a husband who provided well. I should have been happy, but I couldn’t shake the gnawing feeling something was missing.”

Her husband’s career advancements saw the family living in America, Japan, and New Zealand before they returned to Australia. Each move opened the possibility of something that “would squash the feelings of emptiness that sometimes took hold of me.” She fulfilled her duties as wife, mother, and hostess. Baptized a Methodist as a child, she had no structural religious upbringing, but in Japan, she became curious about the eastern religions, Shinto and Buddhism. Her spiritual life grew as she learned to interpret her dreams, experienced out-of-body events, and learned to read Tarot cards. She began writing for an English-language paper which opened her world to more new experiences.

One of the stories took her to Jim Greig, a balloonist. “’What’s a balloonist?” I asked. Who knew that my life would be changed by one casual question?” And so it began. It was the early 1970s and ballooning worldwide was in its infancy, perhaps more so in Australia as the earliest equipment had no instruments. (European and American balloons had temperature and altitude gauges.) Ruth was irretrievably hooked. Her stories of learning to fly, meeting other balloonists and eventually becoming an organizer of events, if there were balloons around, Ruth was bound to be there.

One of her crowning achievements was organizing a fly-drive event across the country – The Trans-Australian Balloon Challenge – to celebrate the country’s bicentennial. It was spectacular. What a way of visiting parts of Australia tourists never see, meeting people in the Outback who welcomed us with open arms. In Kimba, for example, a local said the balloons were the biggest event to hit the town since water had been piped in some years earlier.

Ruth and her husband, Kevin, raised two wonderful boys, Mark and Grant, both of whom became accomplished balloonists, but the marriage did not last, though they co-parented well.

Ruth flew in some of the best-known balloon events in the world: Chateau d’Oeux in Switzerland, Battle Creek, Michigan, Albuquerque, New Mexico, Dubai, Japan, Canada and, of course, all over her home country. While her ballooning life was fulfilling, two of her greatest dreams eluded her: her search for a life partner and the search for her biological father.

Ruth writes that she shared her stories “some challenging, some joyful and others borne of pain that may have forged by evolving spirit…Sure, my fascination for the sky has brought me much pain and loss…but it’s given me power, self-knowledge, independence, and, above all freedom.”

Plan on staying up late to finish this book."

AUTHOR RUTH E WILSON WITH HER MEMOIR
"In her just-released autobiography “Conquering Clouds”, Australian Ruth Wilson unravels the tale of a life grown out of a hardscrabble childhood that later blossomed into a long series of remarkable ballooning – and other – adventures and accomplishments. Winning the first Australian hot air balloon championship after having literally been ignored by the director of her first balloon event because of her gender marked the start of a life of ballooning challenges and achievements. But much of this required her to balance dedicated motherhood of her two sons with her attraction to the clouds. Before I read this book, I knew Ruth Wilson only as a distant acquaintance, seen only at various world hot air balloon championships. Now I am happy to know so much more of her remarkable life story.

VERY CAPTIVATING AND REVEALING
Just received your book and immediately spent an hour or so reading a few chapters. Very captivating and revealing - you’ve led a fascinating life. Well Done!

GLORIOUS STORY OF PASSION AND PAIN
A glorious story of passion and pain written with honest truth and a simple reality that invites us mere mortal readers to indulge in a life to share her pain and feel her elated freedom of her spirit as this passionate woman writes in her words and with her raw talent to achieve another milestone of her courage and fight for freedom from her demons…one of the greats in the history of this country… A triumph!

IT HELD ME ENTRALLED FROM START TO FINISH
I have just finished your inspirational book. It held me enthralled from start to finish and I am left with the question "how has one human packed so much into one lifetime?" It seems that you have lived enough adventure, challenge, triumph and heartbreak for several lifetimes. Some people are driven to succeed because of encouragement. I think your success was due just as much to sheer determination in the face of prejudice and rebellion against narrow minded stereotypes. Most of us would have buckled against the odds but you were spurred on by the impossible to achieve the remarkable, the extraordinary, the life of your dreams. I am in awe of such determination and courage.

IT WAS A GREAT PLEASURE
Just finished reading Conquering Clouds. It was a great pleasure for me to vicariously enjoy, endure or otherwise experience enough Wilson-events to fill three lifetimes. As one who is not half so adventurous as you, I am sure that all your exploits must have consumed enough adrenaline to fill several balloon envelopes! Glad you survived and are still prospering.

TOTALLY IMMERSIVE, IMPRESSIVE, AMAZING AND INSPIRING
Hello Ruth. I just finished your book I picked up two days ago and couldn’t put it down…totally immersive, impressive, amazing and inspiring. I cried, I laughed and was wide eyed in awe of what you have done, what you have endured and how you have risen above, literally, everything that life has thrown at you.

GRAB A COPY TO READ
This is an autobiographical book detailing Australian Ruth’s fascinating life so far. It starts from Ruth’s troubled beginning in the 1940’s and the difficulty of growing up of being the eldest daughter. It is a great insight of what she went through as a child/teenager and reminds us that not everyone has the best opportunities at times.  Once Ruth was married and had children, she moved countries to live for a while. Where? Well I think you need to grab a copy to read the book and find out! Once back in Australia she took on the male dominated sport of Hot Air Ballooning. She details many of her adventures on learning to hot air balloon and go on to fly in some amazing places that made her a leader in her field. She has also experienced some sadness and gets through a few very hairy situations. Ruth really has had an interesting life and luckily, she has captured it into a book for us to read. 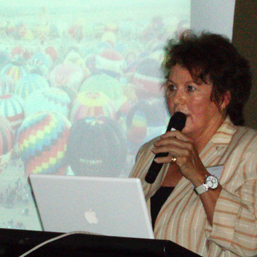 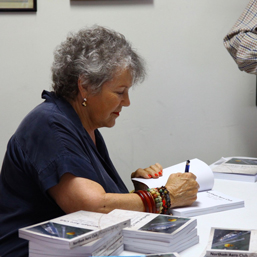 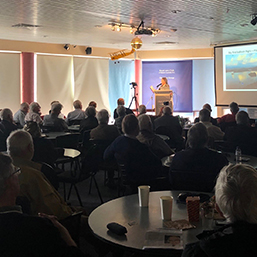 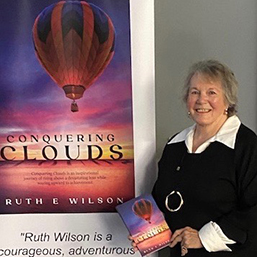