The Magic of Gas Ballooning – Episode 6

The phones were set for a 4.30am wake up call. Inflation of the balloon had been scheduled for 5am for a 6am launch. The hours passed and as 4am hits both Tanys and I were already in preparation for the day’s activities.

Willi arrived around 5.10am and it was all systems go. Tanys worked on the preparation of the layout of the envelope securing tie downs, getting it ready for its hydrogen filling. I sorted out the basket and ropes. Willi was studying area maps. Soon we were airborne once more.

Relatively light winds stayed with us for the past 4 or 5 days so the smog was heavy. It was difficult to see far ahead through the cloudy grey of the air. I thought of our blue blue skies in Australia and appreciated a land that has not totally succumbed to this visible pollution.

22, 25, 30 kilometres per hour – the balloon drifted north east. Over a huge forest dominated by quiet – the first we had experienced since arrival in Germany. The local roads were smothered with huge trucks bumper to bumper along the highways. “That’s a chemical plant” said Willi as the balloon took a slight turn to the right away from the white painted buildings with their chimneys pointed skyward. That pleased all the aerial travellers.

Eventually we drifed towards a village where the church spire dominated the view from a distance. We decided to land just before, basically on the edge of the village. Tanys and I began our agreed landing procedures. She read out loud the metres per second descent while I worked the release of gas (just a small amount) and shovelled sand at the same moment to manage the descent. At tree top level the wind dropped to 12 kilometres per hour. Over the trees down into a slower speed. The descent continued, our team work was as it needed to be to achieve a safe landing.

Back to earth once more. Willi congratulated us both on our landing.

He then decided to take over to fly the balloon into the village itself to accommodate Axel who was driving our retrieve vehicle. We were cruising every so slowly a metre above each roof top. From the air each house had the neatest cute small garden, the streets immaculate with cleanliness. I felt like I was floating into a magical fairyland. The balloon touched down in the tiniest of parks. A few locals rushed to greet us. Tanys handed out our koalas with the Aussie flag to the children. We had made new friends. A gentleman approached the balloon with an iPad, spoke to Willi in German. I thought he was an interested local. Appeared not. The balloon landing and interview about the Australian pilots here practising for the big race appeared on the local News Channel that evening.

Now the more physical work started. Packing up the balloon, basket and gear took close to 45 minutes maybe even longer. On completion a cool beer quenched our thirst.

I joined Willi, Axel and Tanys on a bench in the shade under park trees for our picnic breakfast – it was noon. Time to celebrate how well Tanys and I have come to working as a team as pilots of a gas balloon. Such joy! 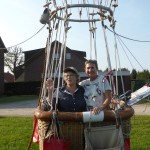 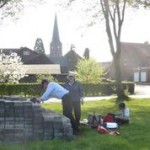 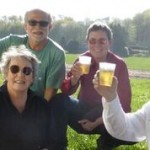