On the road again this time to Switzerland. But I take fabulous memories of the past few weeks with me. Memories of sharing with the best gas balloon pilots in the world but more importantly sharing time and emotions with welcoming pilots and their crews from eleven countries.

Memories of-
Observing the Command Centre of the 63rd Gordon Bennett Cup – Event Director Markus Haggeney maintaining dignity under pressure, calm in this role. After all his first GB Cup as Director was in 1992. His Deputy Benoit Pelard, President Federation Francasie d’Aerostation usually flying his balloon in this prestigious race. This year he is the public face of the team of the officials.

Benoit Peterle Safety Officer usually sharing the basket as second pilot with Benoit Pelard but this year responsible for the safe hydrogen inflation and launch of 20 gas balloons.

Nik Jervis background in Air Traffic Control work who began six months earlier communicating with the various European countries to alert them that come September 13 there may be possibly 20 gas balloons seeking permission to enter their airspace. The Balkan countries were enthusiastic. “When are they coming?” Some of the other countries less so. It meant more work for them to monitor and communicate with often weary pilots.

The laughter and fun with Valia, Eva-Lena, Camille and Melanie.

My strongest memory is watching the teams fly then land somewhere on the European continent. After 4 nights and days in a balloon basket Team Swiss 1 landing close to the village of Sfantu Gheorghe on the coast of Romania to win the famous Cup. Second place to Swiss pilots Kurt Frieden & Pascal Witpraechtiger who fought a tight fight even floating out over the sea to find a sea breeze to bring them further with their final result to drift back to land on the coast of Belarus. Kurt asleep in his basket during flight.

Laurent Sciboz and Nicolas Tièche were presented with their gold FAI medals on the podium to loud cheers and acclamation from their loved ones and peers at the final Formal Awards dinner that lasted over six hours. A long, slow dinner also shared with Australian gas balloon pilot and GB competitor Kiff Saunders and his son Paterson. 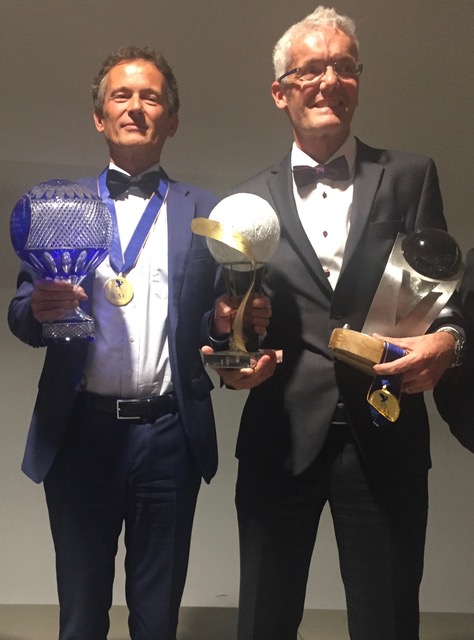