It is believed that the kangaroo and emu were chosen as a native animal and bird for the Australian Coat of Arms to symbolise a nation moving forward based on the common belief that neither animal can move backwards easily. Seems a logical reason to me. Both kangaroo and emu dominate the pastoral lands of this north western area of New South Wales that the caravan has covered these past couple of weeks.

While I have floated over many kangaroos during my ballooning I can’t recall flying over any emus. Got very close to one yesterday running parallel to the caravan when it darted across the road in front, losing its footing on the bitumen, falling, recovering to rush into the safety of the nearby bushes leaving behind emu feathers flying everywhere. Hope it realised what a close call it had yesterday as there was no time to stop the vehicle. So relieved one of our national birds was not killed on the deserted road to Cumbora. 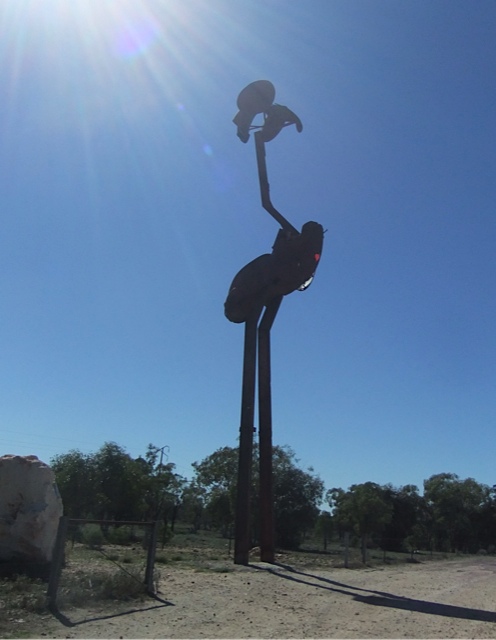 There were no emus around the Lightning Ridge Holiday Park as we waved goodbye to the owners Belinda and Beau, a young couple committed to building their dream here at their Park. Heading to Lightning Ridge – you won’t find better – even piped music into the ablution blocks plus their weekly free pizzas.

I left without an opal but not without a new pair of gold and silver earrings from New Mexico.
The opal that spoke to me carried the value of a new sports car. Such discipline to leave with my new earrings with a Native American twist. More on my fascination with the Native American spirit soon.