A whole lot of shakin’ going on! For 10 kilometers driving or crawling along this rugged dirt track has been more bounce on my body than one of those exercise machines advertised on television. Word around town last night was not to miss the Opal Fields around Grawin and Glengarry or the three quirky pubs so that’s the target today.

After nearly 60km on bitumen we turn onto the infamous dirt track into the bush. First point of interest is the Club in the Scrub Golf Course, although I doubt any human has ever hit a golf ball over this course. But it’s a fun concept. Continue on amongst the trees past the shanties, old abandoned caravans and piles of mulloch to emerge at the Lake Beard War Memorial, built by miners, many of who were Vietnam Veterans. I stay awhile to allow my thoughts to go to my darling brother Ron who was also a Vietnam Veteran. He survived the war physically but not mentally or emotionally. Eventually life became too difficult and he took his own life sixteen years ago now but my pain at his pain still feels raw.

Next stop the Sheepyard Pub as I am now ready for a refreshing beer and a silent toast to Ron. The sign says this pub offers a completely unique outback experience. There is a pool table and opportunity to take lots of photos of weird Aussie humour but I resist. Hanging bras adorning a large nearby tree draws a couple of tourist just arrived, their cameras clicking furiously.

The final attraction is the Glengarry Hilton Hotel, a Sheepyard franchise. Three miners are taking a break for late lunch and a few beers so we chat about the world of opal mining. I feel no urge to seek this gem and remain thankful that I have my world of ballooning to distract me from everyday living.

Tonight the caravan park owners cooked pizzas at a communal centre on site. All campers were invited to attend and enjoy their pizzas, an opportunity to socialize with other travellers.
After a couple of hours of chat it was time to retire.

An unusual day it’s definitely been. 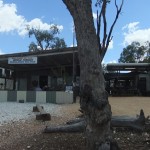 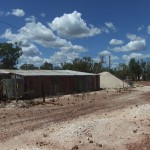 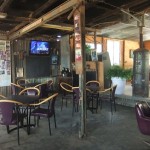 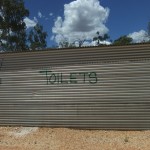 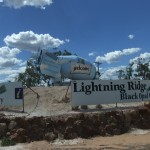