This morning I am missing my hot air balloon. The sky over Lightning Ridge is totally welcoming with just a gentle breeze moving the treetop leaves. It is a perfect flying morning and I am grounded. I stare longingly at the large trees framed in the caravan’s kitchen window and wish I was contour flying at treetop level.

Like an addict searching for his next hit I go searching for mine – looking through my stored ballooning photos. Chateau d Oex Switzerland flights in Spruss balloon and on another day experiencing my hopper balloon flight over the snow, a relatively new concept in 1986.

How privileged am I to have this amazing destiny. And I thank the French for conquering the race to put man into the air.

On November 21, 1783 In front of King Louis XVI and his Queen, Marie Antoinette, Monsieur Jean-Francois Pilatre de Rozier and his friend, Major Francois d’Arlandes rose into the sky from the grounds of the Chateau la Muette in the Montgolfier aerostat designed by Joseph and Etienne Montfolfier to be honoured with the first human free flight ever. The 78 feet high balloon drifted over the Paris rooftops at about 500 feet for twenty-five minutes and landed safely 5-1/2 miles away on the Butte-aux-Cailles.

A couple of months earlier, the Montgolfier brothers had launched their first balloon made of rag paper reinforced with linen with a wicker basket, not with men but carrying a duck, a sheep and a cockerel as no one was sure what could happen to the balloon once in the air. Suspended over a fire of old shoes, wet kindling, straw and rotten meat, the balloon sucked in the smoke and rose to into the sky, floating away for eight minutes, landing 1-1/2 miles from the launch site at the Chateau de Versailles. The animals suffered no ill effects from the experience and the sheep was installed in the Queen’s private zoo.

“It’s the sport of the Gods”, declared Marie Antoinette who was beheaded a few years later by the same size Parisian mob that had cheered and shared the excitement of that first flight with her.

Enthusiastic journalists of the day reported “journeys by air will be so speedy, so convenient and so low in cost that we shall even see women visiting the four corners of the earth”.

One hundred and ninety two years later, I was one women who would fulfill that earlier belief, one woman who would continue to covert flight by balloon, who would travel to the four corners of the world to fly my balloon. One woman who would find my inner core through my relationship with featureless, dancing currents in the Air, and continue to go dancing on the clouds for over four decades 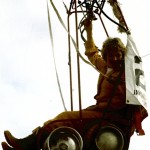 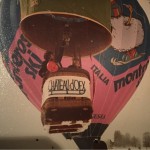